Women's History Month is an annual celebration of the contributions women have made and a time to recognize the achievements women have made during the course of history. As a woman-founded company, we at JL Racing would like to celebrate all women in sport, as well as reflect on women who have challenged gender norms and left a lasting legacy. Join us in celebrating women during the month of March!

In honor of Women's History Month and International Women's Day (March 8th), we sat down with Team JL Ambassador, Rachel Smillie to ask her what she is doing to celebrate women in sport. Her answer? A Guinness World Record attempt on the indoor rowing machine to travel the furthest distance by a female team in 24 hours. Keep reading to learn about the details of a row like this, why she is taking on this challenge, and what Rachel hopes to accomplish by taking part in a 24 hour row JL Racing: Tell us a little bit about the challenge that you are undertaking on March 12th.

Rachel Smillie: From 10am on 12th March until 10am on 13th March Team Excelsioar (Caroline Hague, Nicki Kelly and Rachel Smillie) will be taking on a 24 hour indoor row. This is a Guinness World Record attempt with us aiming to travel the furthest distance by a female team in 24 hours. This is a serious undertaking in its own right, but for us is also a part of a bigger challenge, to row 3000 miles unsupported across the Atlantic in 2023 as part of the Talisker Whisky Atlantic Challenge.

JL: What are the logistics for the row?

Rachel: We’ll be rowing in shifts of one hour each. With three crew members that means one hour on and two hours off. That’s the plan but if we start to find it difficult to maintain the pace we need to get the record, we may switch around more regularly or adapt our shift patterns to give us the best chance possible! We’re all hoping to sleep in our ‘off’ shifts, but as we’ll be in a shopping centre I think this is probably unlikely! In that respect it will give us a tiny taste of the sleep deprivation we’ll experience on the Atlantic. In terms of nutrition, we’re also using this as an opportunity to test some of the dehydrated meals that we’ll use on our ocean crossing as these pack in a lot of calories. We’ll have some treats to keep up morale too and help get us through the night shifts! An hour of rowing burns roughly 500 calories so it’s important that we keep our fuel levels up. Ideally we’ll be taking on a small amount of food in each of our ‘off’ shifts to ensure that we’re suitably fueled for the challenge, but not risking feeling sick when we get back on the erg. This kind of record is, I think, won and lost on whether you’ve managed to keep hydrated and given yourself the energy to get through it.

JL: Why are you doing this row in March? What is the significance of this time to you?

Rachel: When we signed up to row the Atlantic, a key motivation for us was inspiring people, particularly women, to push themselves and take on their own challenges - whatever they may be. Team Excelsioar were born in three different decades, and so with both the 24 hour row and the Atlantic crossing, we want to show women at any age that they can do exceptional things. While it’s particularly appropriate for us to take on this challenge to celebrate International Women’s Day, the date of the row has further significance for us. Nicki’s father lost his battle with cancer at the end of 2020 and we will finish the 24 hour row on his birthday. He always supported women’s achievements and challenged inequality throughout his career, as well as supporting Nicki’s mum when she returned to university as a mature student. This is an important example of male allyship which is crucial if we are to succeed in breaking the bias and forge women’s equality.

JL: Is there anything else you would like to share regarding Women’s History Month, International Women’s Day, or women in sport?

Rachel: We hope that this challenge will further the conversation around equality, particularly for women in sport. One of the most wonderful things about being part of the ocean rowing community, and part of women’s sport more generally, is to continually see amazing examples of women lifting each other up and celebrating each other’s successes. This is such a powerful thing and that sense of shared community is essential for girls and women to feel like sport is a space for them. This carries over to other areas of life too. Women supporting women is not a given. We’ve been socially conditioned to see other women as competitors and to judge them by the same standards that we’re judged by ourselves. The more we support each other, and the more we see women supporting women, the less likely we are to perpetuate these patterns and the better we can effect positive change. A high tide raises all boats.

JL: Prior to this challenge, what is the longest time you have spent rowing?

Rachel: Nicki, Caroline and I have all done endurance challenges both on and off the water. Caroline has regularly completed marathon rows for charity (Thames Hospice - one of our charities for the Atlantic row). On the water, in 2019 we entered the Row London marathon event which was eventually cancelled so we did that on our own stretch of river with a LOT of turning around! We’ve also taken part in other sponsored rows on the water, included our rowing club’s charity Henley to Eton row. Outside of rowing, we’ve taken on marathons and other distance events. In preparation for this challenge and for the Atlantic row we’ve been spending a lot of hours on the erg so we think we’re well prepared for the monotony, that said, this is on a different scale to what we’ve taken on before! JL: What is your goal for the row?

Rachel: To set a new world record, we need to cover more than 250k in 24 hours but we’re a competitive bunch so we want to cover the furthest distance we can!

JL: Why are you doing this challenge?

Rachel: In addition to the things I mentioned previously, the 24 hour row is excellent training for our Atlantic challenge. It sounds like a silly thing to say, but one of the big challenges with rowing 3000 miles is the boredom! Rowing 2 hours on, 2 hours off, for potentially up to 60 days is a huge mental effort as well as a physical one, so the 24 hour row will give us some insight into that. It’s also an opportunity to get people thinking about our Atlantic row and hopefully to raise sponsorship to help support our crossing.

We’d love it if people could support the 24 hour row and our Atlantic Crossing by following our journey on instagram @teamexcelsioar and by sponsoring a mile (or miles!) of the 3000 we’ll row across the Atlantic. 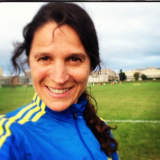